It was back in 2008 that the world’s first curved computer monitor was displayed at the Consumer Electronics Show. Since then, the idea of a curved screen has steadily gained in popularity, with most major manufacturers offering at least one curved model. However, flat monitors are still the norm. So, which type of screen should you choose to work on? And if you go for curved, which is the best curved monitor for your home office?

What exactly are curved monitors?

As you would expect, curved monitors are simply monitors that – rather than having a flat screen – have a screen that curves inwards, in a concave shape. 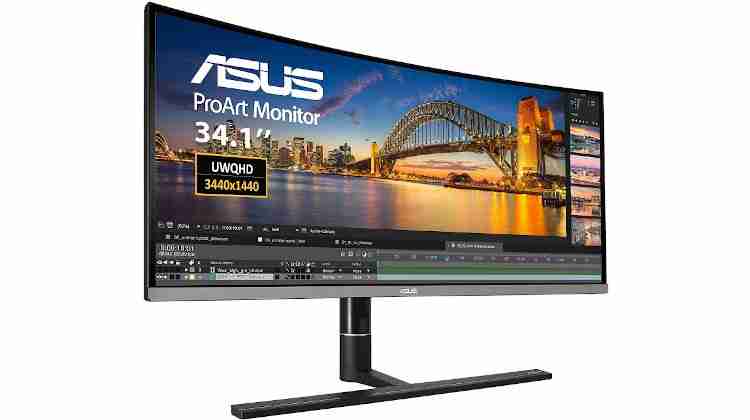 Curved monitors were originally marketed to gamers, as manufacturers argued that the curvature of the screen would provide a more immersive gameplay experience. This proved popular among hardcore gamers looking to feel more absorbed in game worlds, and possibly even gain an advantage over competitors.

In the years since, manufacturers have expanded the market for curved screens beyond gamers, targeting business users with their curved displays.

“Now, we will focus not only on growing market share in North America, but also in the global B2B marketplace by enabling curved monitors to increase the focus and productivity of businesses around the world”

Why would you want a curved monitor in a home office?

Manufacturers and fans of curved monitors claim that they have a number of advantages, including:

The extent to which these are genuine benefits will depend on your own experience and requirements. Many people don’t notice any distortion when using a flat monitor, so they wouldn’t see that benefit when using a curved monitor.

Equally, when using the monitor for work, rather than gaming, you might not be too bothered about how wide your field of view seems.

Reducing eye strain is clearly a good thing, particularly for anyone who spends hours working at their computer. While an increased feeling of immersion could help to improve focus, allowing you to do better work for longer.

Can a curved monitor improve efficiency?

Samsung suggests that there are productivity benefits to working on a curved screen. And they claim that the benefits go beyond simply feeling more immersed in the task at hand.

They also suggest that curved monitors are helpful when working in two applications at once. For example, a spreadsheet and a Word document. However, it’s worth noting that you could also achieve this benefit using two flat monitors, or even a single flat monitor with in split-screen mode.

What are the disadvantages of curved monitors?

Disadvantages to getting a curved monitor include:

In our guide to setting up a home office, we recommend using more than one monitor. However, curved monitors aren’t well suited to this kind of dual monitor set up.

This is because you get the best effect from curved monitors when you sit in the middle of the screen.

If you have two curved monitors side-by-side (creating a larger curve), then the middle of the curve will be where the two monitors meet. So straight ahead of you, you’ll be looking at bezel rather than screen.

You can see what we mean in this photo from 9to5toys.com. See how the two monitors meet in the middle, creating a vertical black line?

Of course, a solution to this is to have three monitors, but that is of course expensive, takes up a lot of desk space, and won’t be practical for everyone.

Whether this is really a problem is a matter of opinion. Some people won’t be concerned about the bezel line.

Also, you could argue that an ultra-wide curved monitor – able to display multiple sources of information – removes the need for multiple monitors anyway.

Instead, you can gain the same immersive feel, and space to multitask, from a single ultra-wide curved display.

Which is the best curved monitor for your home office?

Our choice of Best Curved Monitor for the home office is the Asus ProArt.

One of the main reasons we made this choice is the monitor’s fantastic color accuracy. Lots of home workers perform tasks such as photo editing, video production and design work, so it’s good to know that your monitor is presenting colors accurately.

The Asus ProArt is also highly adjustable. This is vital for anyone working at a desk for long period of time. We strongly advocate good ergonomics, as a bad homeworking setup can have serious consequences for your long term health. Fortunately, the Asus ProArt can be adjusted to suit your needs.

The height of the monitor can be adjusted within a range of around 4 inches, while it also has a high degree of tilt and swivel. All of this means that you will be able to get the monitor aligned to perfectly suit your seating position.

The bezel around the edge of the Asus ProArt display is very thin. So if you are looking to create a dual-monitor setup, the problem that we discussed earlier will be reduced. There will still be a vertical line down the centre of your two screens, but it will be far less distracting than with other monitors.

Finally, while it is aimed at a professional market (particularly designers, video editors and photographers), the Asus ProArt is also a highly capable gaming display. So, you’ll be well set up if you want to take a break from work and immerse yourself in a gaming world.

Find out more or buy now from Amazon…